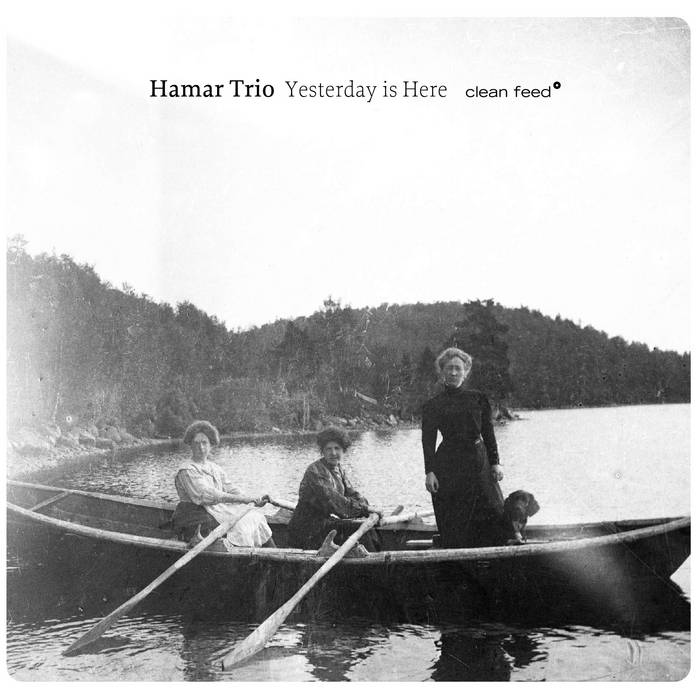 Here is an example of a specially well succeeded co-operation between a notorious representative of the Norwegian scene (Klaus Ellerhusen Holm) and two of the Portuguese one (Hernâni Faustino and Nuno Morão), combining the recordings of live presentations in a couple of spaces dedicated to creative music in Portugal, Salão Brazil (Coimbra) and SMUP (Parede). If you’re a Clean Feed fan you already listened other titles documented in both venues, by the likes of Steve Lehman, Ken Vandermark’s and Adam Lane’s Four Corners, Fredrik Nordstrom Quintet, Daniel Levin Quartet, Zanussi 5, Angles, Harris Heisenstadt’s Canada Day and others. “Yesterday is Here” has the same relevance, and it equals what you know of Holm from the bands Honest John, Ballrogg and Abaft the Beam, of Faustino from RED trio and of Morão from The Selva: music committed to «celebrate the moment», to paraphrase Derek Bailey, only answering to the appeal of spontaneity and intuition, in a very natural and even organic way. The framing is in jazz and experimentation, meaning that everything else that may happen disregard labels and any sort of categorization. A party for your ears, in short.

After establishing his name during the Eighties as an electric bassist in alternative rock bands, Hernani Faustino turned to avant-jazz and free improvised music and chose the double bass as his self-taught instrument. Two decades later of multiple interactions with Portuguese and international musicians, he’s now considered one of the most intense and solid bassists in the Portuguese scene. ... more

Bandcamp Daily  your guide to the world of Bandcamp